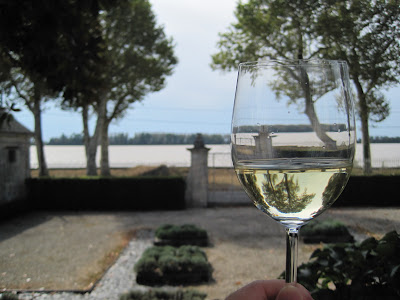 I returned from Bordeaux on Friday, September 28th. Two days later, I started this article in the hopes of quickly putting together some thoughts from my trip. Unfortunately, the more I attempted to distill everything that happened into a concise account, the more a stray idea or remembered thought would intrude, filling valuable space in the story.

That said, I feel like I now have a better idea of what this post will be about. Prior to leaving, I posted a brief note, Bordeaux Bound, explaining some goals for this trip. I’m happy to report that the goals were fulfilled, and bringing the stories to you over the next several months is going to be a lot of fun. Right now however, I’d like to present some broader ideas that have germinated as a result of my time there.

Everywhere I looked in Bordeaux, there was and is history that stretches back hundreds, sometimes a thousand years. Simply assuming that the Grand Cru Classe producers have all the history is an error, for I visited and stayed at multiple Chateaux that were older than the United States. Growing wine grapes is Bordeaux, put simply. A thought occurred to me during the drive between wineries; that if the land wasn’t right for grapes, no one would be growing them. For all the up and coming regions across the world and all the compelling wines from those regions, places like Bordeaux are where the inspiration originated.

Read the rest at… http://beausbarrelroom.blogspot.com/2012/10/back-from-bordeaux.html